The express ALLEGRO left Saint Petersburg station at early morning and arrived at Helsinki, the capital city of Finland, after several hours via coniferous forests area. I’m going to next town, Stockholm by ferry this evening because I’m going back here again after I visited the other Northern European cities. I put my bag in the locker of the central station and went to the downtown. Streets and buildings there look different from and more sophisticated than that of Russia. When we talk about Northern European Countries, we often associate them with how excellent their design of anything is. You can find some designs with playful spirits from the figure of architectures to the arrangement of letters on the signboards. In addition, they make the local’s life more enjoyable. 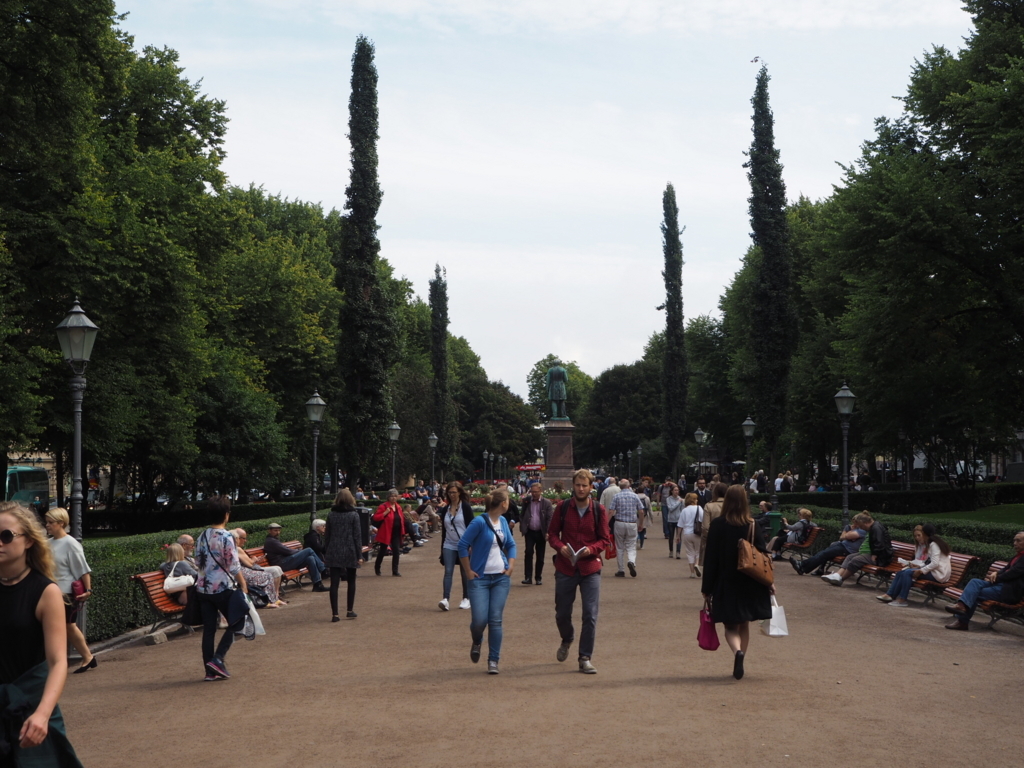 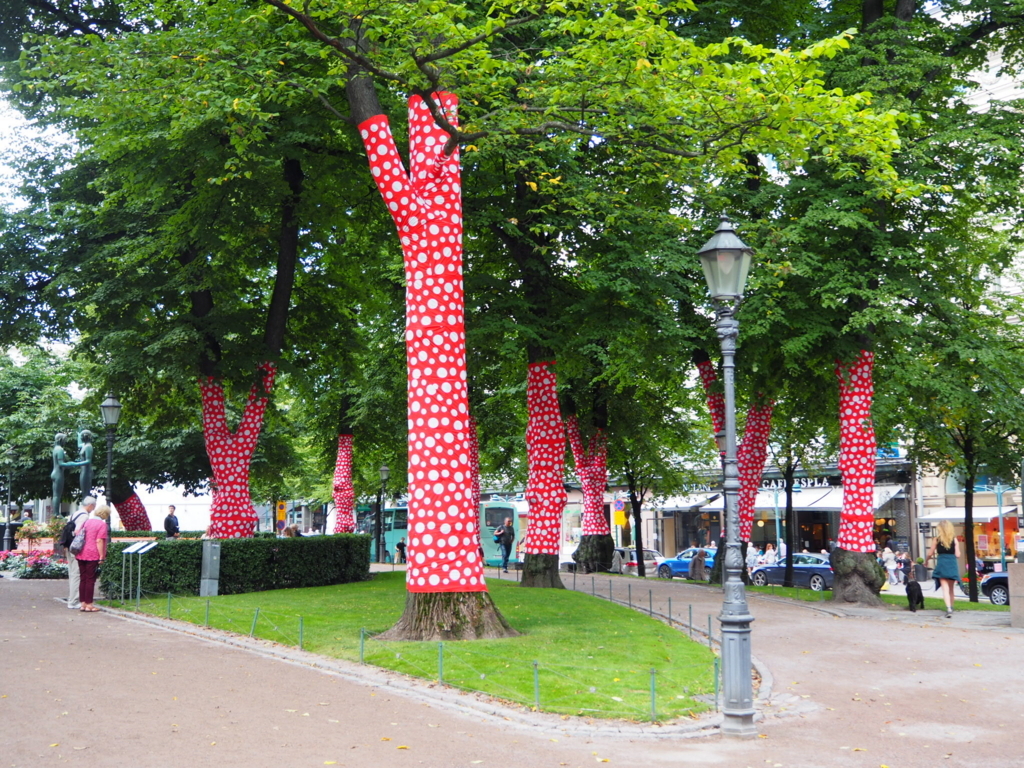 There are different races in different countries and also their looks vary from people to people, but I found their facial expressions are more different than their looks. I saw lots of people who looked severe in Russia though, there are many smiles here. They say that the reason Russian people don’t always smile is “It looks more silly than they don’t do it”. It is more comfortable and easier to relax my guard when I stay with people who have smiles. 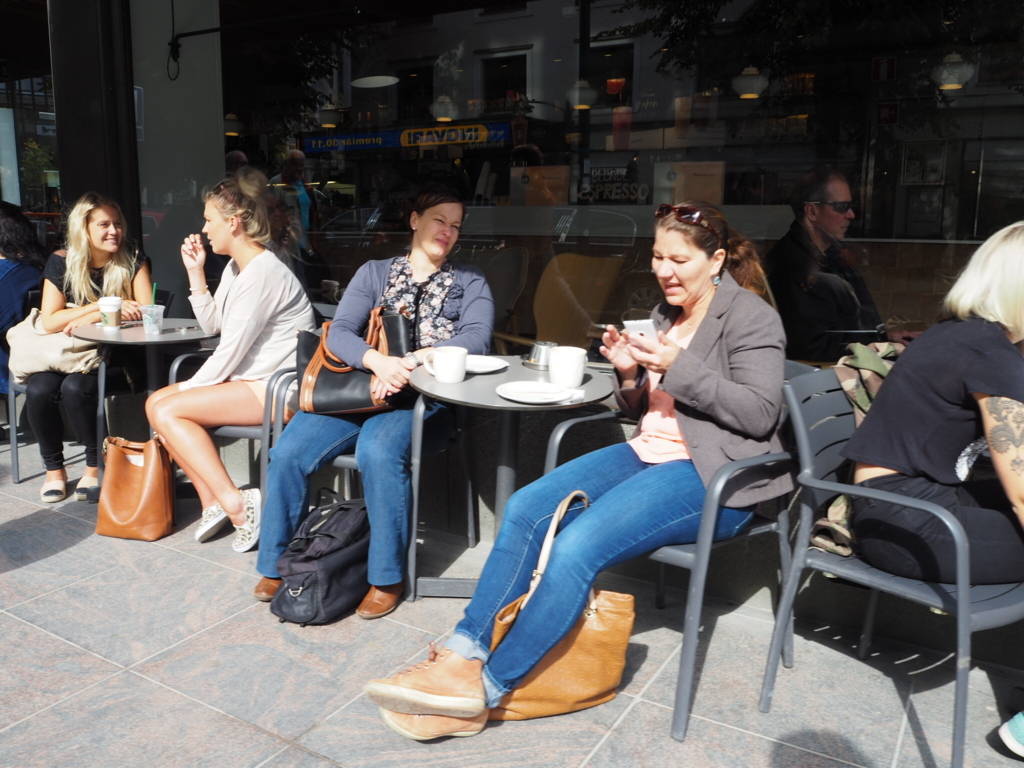 Since the departure time was coming, I got to the port and Moomin and Little My welcomed me. The ferry left for Stockholm around 5PM. Helsinki is at a much higher latitude than Japanese cities and the sun is still very far from the sea for this time. This ferry went slowly between small islands. When it got to the open sea, it picked up its speed and was sailing to the horizon. 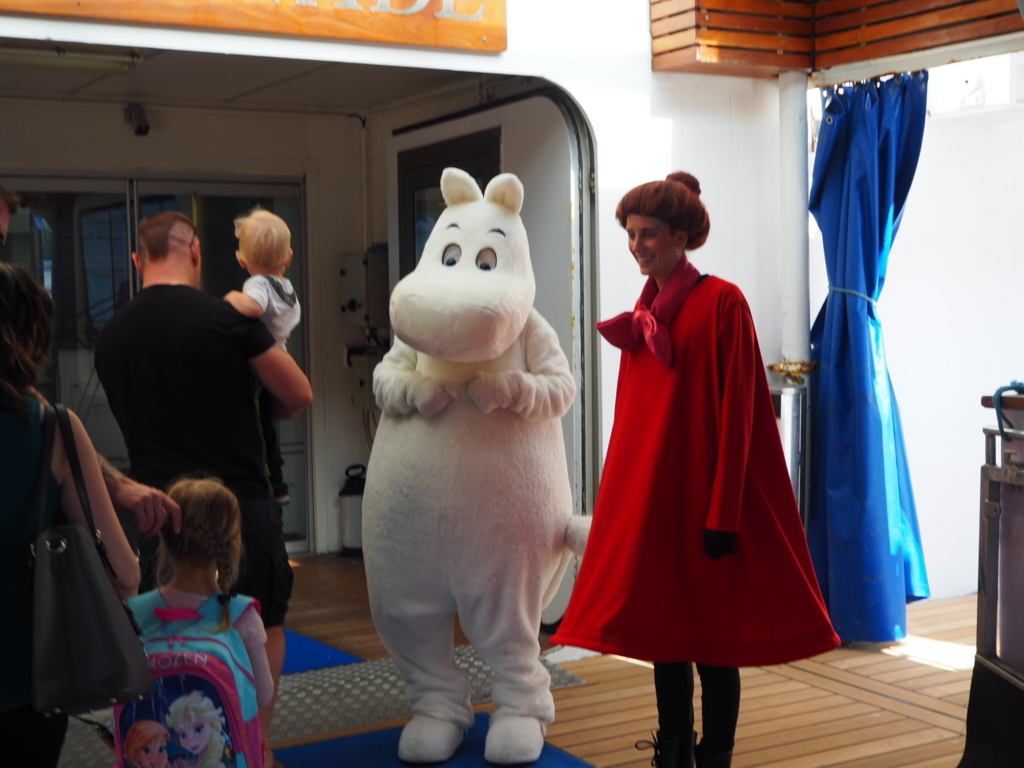 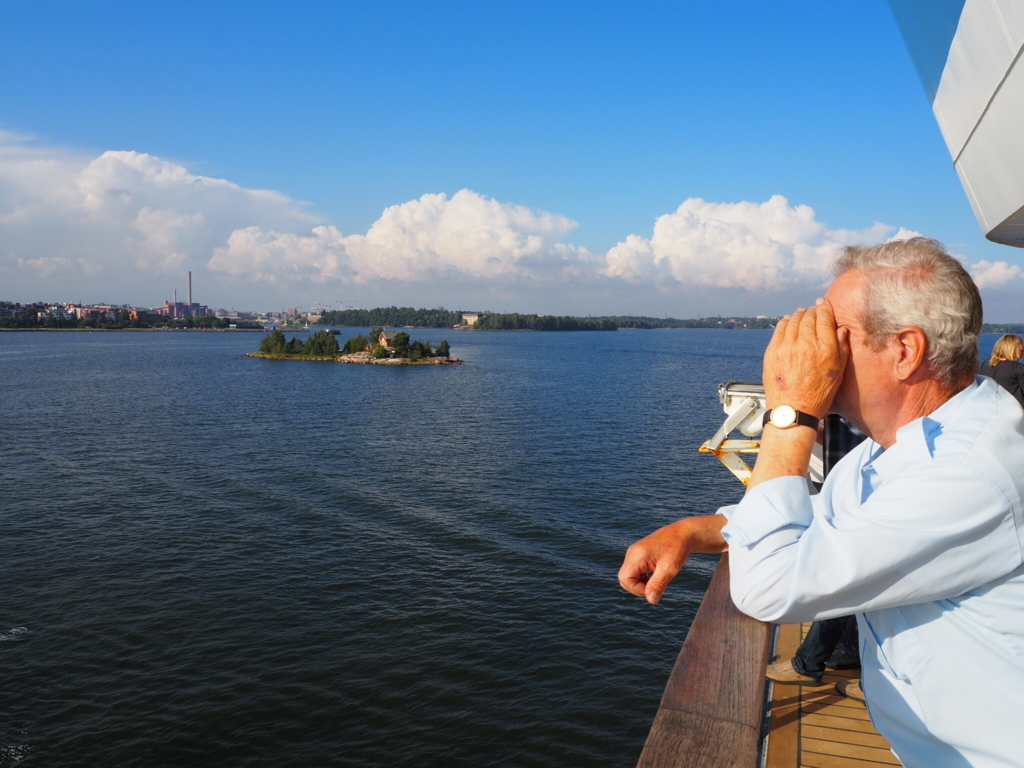 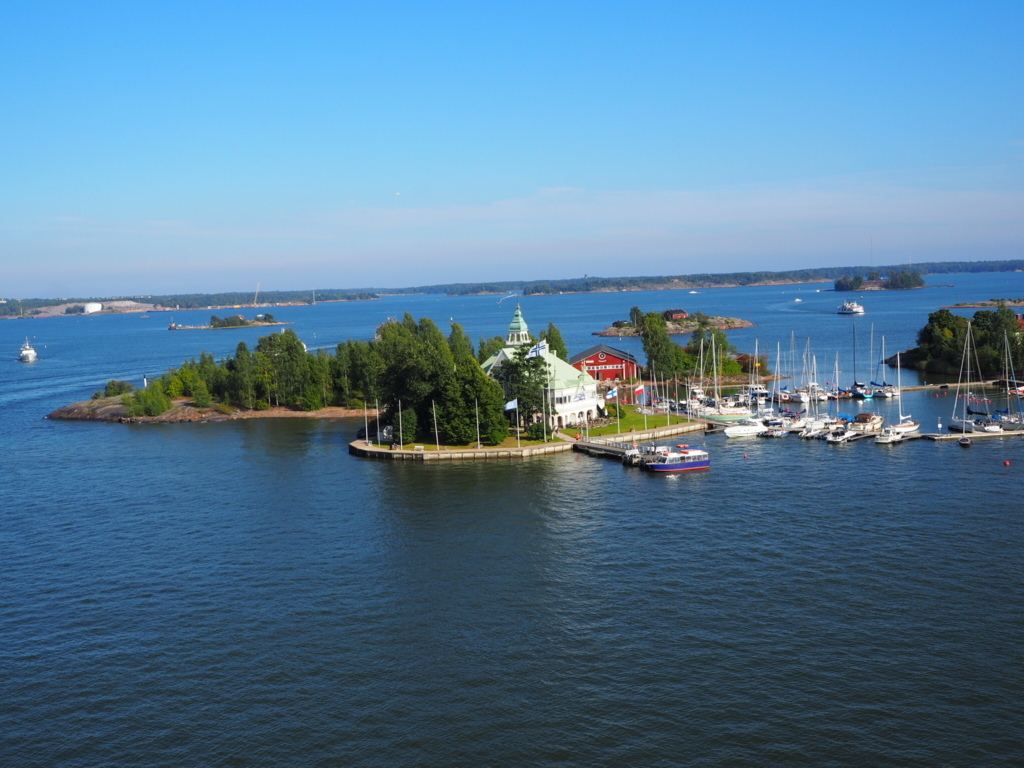 After browsing through shops with no intention to buy (because the prices here are more expensive than the regular prices in Finland!) and having dinner, got to the deck to see the sunset at 8:30 PM. The sun was already sinking deeply and icy wind was blowing there. Recently, I have often seen the sunset except for rainy days. The evening sun sinking in Baltic sea was wonderful and it had still lighted the sky by crimson. I could see the beautiful sky as always, but came up with a question. “Why I hadn’t seen this scenery in Japan?” 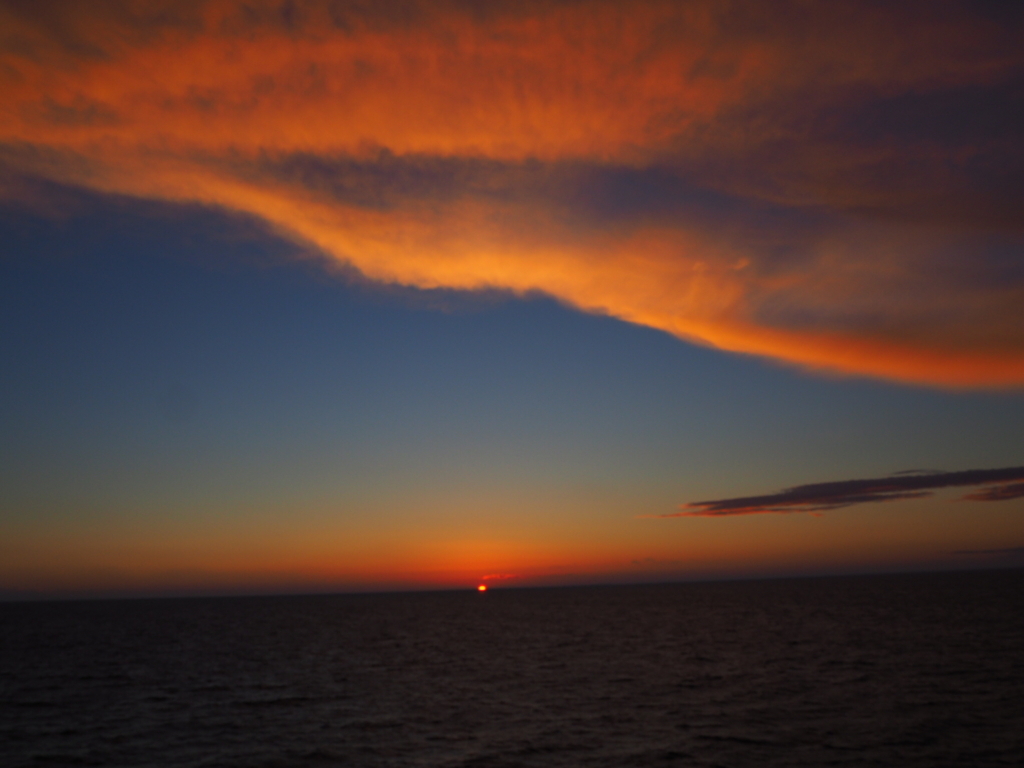 I had been working in Tokyo and Yokohama for about 6 years, but I hardly seen beautiful sunset. When I travel in foreign countries, I often see it, but it is different while staying in Japan. The time of sunrise and sunset are different from how much latitude you are at, but it doesn’t affect how the sun comes in so much. Of course you can see the sun and the sky vividly if the air is clear, but the air of the big cities in Japan is not as polluted as you expect pessimistically. You can’t see the moment of the sun gets the most deeply red because the high-rise buildings block the scenery, but you can see the sky painted with crimson. Taking them into consideration, there are no big differences from where I had lived and where I was traveling so far.

Is it a matter of mind? Before I started traveling, I had been working as a IT engineer. It was relatively hard and had been pretty stressed out sometimes, however, I must have lived peacefully for more than six month in a year.

I read some books about cognitive science sometimes and they say that seeing is not directly connected to recognizing. I probably hadn’t tried to recognize and understand something even though I had seen the sunset with my retinae. I would had overlooked the various scenes in the same way.

I think it's strange to think such a thing on the ferry sailing on the Baltic Sea. However, thinking about something I haven’t thought so far is probably significant. I have heap of things which I want to think and books to read, but I will do it tomorrow. It is getting much colder here. Although I’m in August, It is too cold to stay outside at night of Northern Europe.

世界を長期で旅した記録・記憶を日英文で書いてます。
I write travel journals and take pictures all over the world.